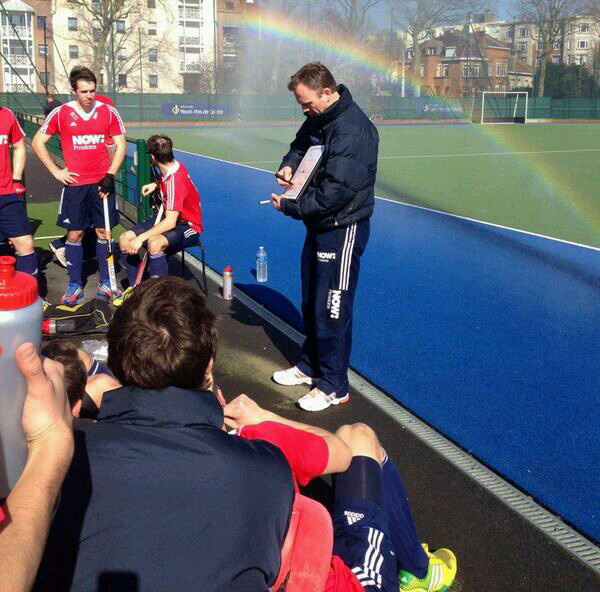 Great Britan and France drew 3-3 in Lille on Thursday, the second draw in the two-test series.

It was a much brighter opening from Great Britain than in Wednesday’s 0-0 draw, and they went three goals up inside 21 minutes

Wimbledon’s Phil Roper scored his first goal for Great Britain in the fifth minute with a reverse stick effort from 10 yards out after Ben Arnold had made a driving run into the danger area to slip the ball to Roper.

Great Britain continued to put the pressure on France causing their defence problems. In the 13th minute an excellent team move down the right resulted in the ball being driven onto a French foot in the circle and Reading’s Nick Catlin seized on the advantage to tap the ball home from close range.

Catlin only had to wait another eight minutes before he secured his brace; this time his goal came from a Great Britain penalty corner. The corner initially broke down at the top of the circle when the ball was mis-trapped, but Catlin was waiting wide left to receive the resulting pass and he made no mistakes as he smashed the ball into the far corner.

A determined French side came back into the game with renewed vigour and pulled three goals back to earn the draw. Their first goal came just before the break in the 30th minute for Guillaume Deront from a deflected penalty corner and then following the break they scored twice in two minutes.

An unmarked Simon Martin-Brisac got the first from close range as Great Britain were punished for some slack defending and Hugo Genestet scored just two minutes later, again from close range, after a wide ball was fired in across England’s circle to the far post.

Great Britain coach Bobby Crutchley said, “It was a much improved performance from us today with a greater intensity in our attacking play and overall we should have won the game. Slack defending at the start of the second half cost us and although we created some good chances later in the game we weren’t able to convert them into goals.”

“I was pleased to be able to name [Holcombe’s] Dan Fox to be captain for these two matches in the absence of Barry [Middleton]. Dan’s leadership skills in the group have been clear for some time, even when he’s not captain, and he has qualities that I know both the players and coaching staff really value.”