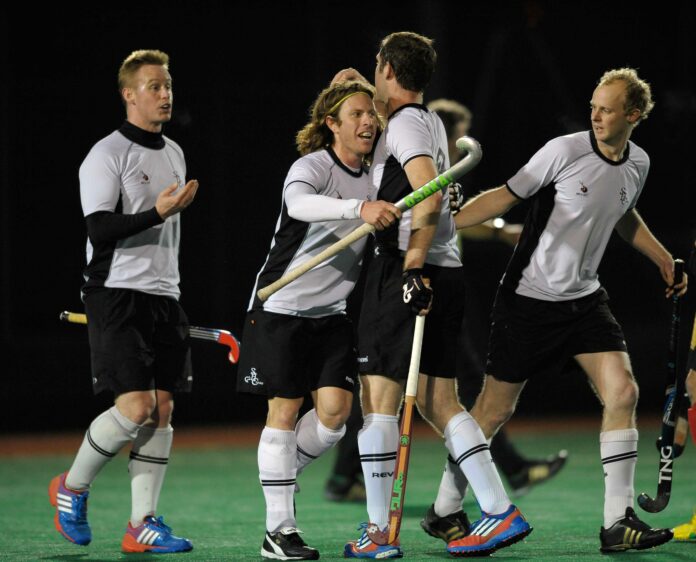 East Grinstead stormed to the top of the NOW: Pensions Men’s Hockey Premier Division with a resounding 7-0 win over Wimbledon.

Mark Gleghorne and Ashley Jackson scored two each as their team took full advantage of Beeston’s draw against Canterbury.

Canterbury fought back from two goals down to earn a draw against Beeston, who began the day at the head of the table.

It was only the fourth time that Beeston have dropped points this season, although they looked to be set for a 12th victory after Sam Ward and then Ben Arnold had put them in front.

But Canterbury, with an eye on the play-offs, battled back and Kwan Browne reduced the arrears on 52 minutes, sweeping home from open play.

Then with five minutes remaining, Michael Farrer nicked a point for Canterbury, finding the net from a penalty corner.

Alan Forsyth kept Surbiton in the play-off hunt with a four-goal haul in their 8-2 win over Loughborough Students. The result sees Loughborough drop to the bottom of the league.

There was a big game at the wrong end of the table with Sheffield Hallam facing third from bottom Cannock.

Hallam got off to a great start, leading by goals from David Goodfield and Liam Ansall at the break. But goals from Arjan Drayton Chana and Peter Jackson squared the scores and it ended 2-2.

Chris Cargo and Chris Newman led the goal-scoring for Reading who inflicted a 5-0 defeat on Hampstead and Westminster.

The top two sides in the Now: Pensions Conference East played on Saturday and it saw Southgate beat Holcombe 4-3 and take their place at the top. Rick Gay was the star of the show with a brace.

Goals came from Rupert Shipperley and Jack Pritchard were enough for Cardiff to stay top of the NOW: Pensions Conference West. They beat Guildford 2-0.

The men’s finals will take place on the 5-6 April while the women will battle it out a week later from 12-13 April. Tickets are now available to purchase for both weekends, please visitwww.englandhockey.co.uk/tickets