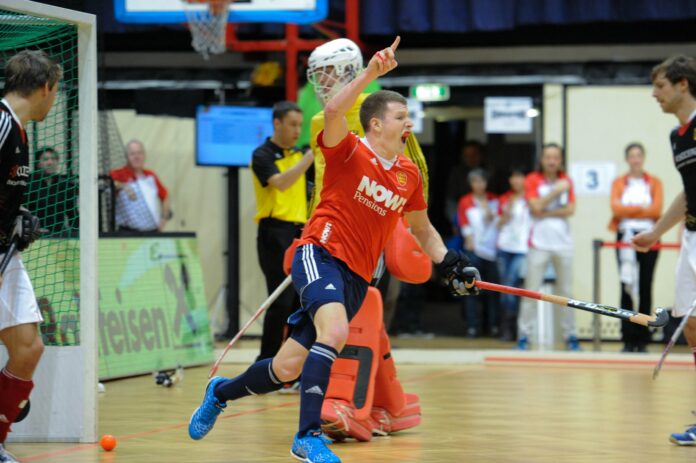 [img_assist|nid=8757|title=Close|desc=Sam Ward scores against Germany but the game was eventually lost 10-8 – Germany went on to retain their European title. Photo: www.hockeyimages.co.uk|link=node|align=left|width=220|height=146]ENGLAND’s hopes of retaining their top-flight status – and qualifying for the indoor hockey World Cup – disappeared after they suffered a string of narrow defeats at the EuroHockey men’s indoor nations championships in Vienna, Austria, at the weekend.

Their bid to avoid dropping out of the top flight went right down to the wire, but a 2-3 defeat to the Czech Republic on Sunday ended their hopes and was just the latest in a string of very close matches.

Only once did England lose by more than one goal, and secured a hard-fought and deserved draw against eventual bronze medalists Russia.

And they were leading 7-6 against eventual winners Germany with five minutes remaining before the reigning World and European champions hit back late in the game.

“Although bitterly disappointed not have achieved a better final placing, I am nevertheless proud of the effort and the progress from this squad of players,” said coach Andy Halliday.

“Indoor hockey at this level is uncompromising, so I hope we are able learn from this tournament and continue to build for the future.”

After relegation to Championship II in 2012 England had been bumped back up to the Championship after Spain withdrew from the event. This now seems particularly unfortunate as the winners and runners-up from Championship II (France and Switzerland) qualify for the 2015 World Cup, in Germany.

The other European World Cup qualifiers to join Germany as hosts should be Austria (2nd), Russia (3rd), Netherlands(4th) and Czech Republic(6th), plus another European team, as Germany have qualified as hosts and Euro champions. It is not immediately clear from the qualification criteria whether this team will be seventh-placed Sweden who have in fact been relegated along with England.