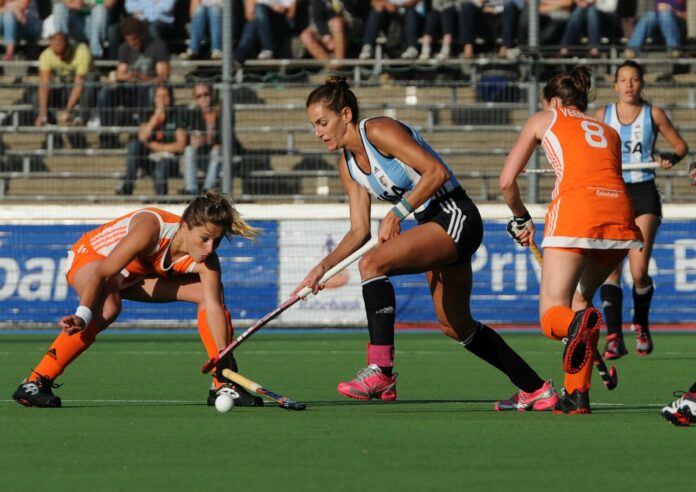 Argentina superstar Luciana Aymar has been unveiled as the International Hockey Federation’s player of the year for 2013 at a special presentation ceremony at the Argentina Hockey World League Final in San Miguel de Tucuman.

The evening wasn’t perfect for ‘La maga’ however, Aymar had her decisive effort saved as Netherlands defeated the hosts 3-2 in the shoot-out after a 2-2 draw.

The result sets up a Netherlands-Australia final on Sunday. England will play Argentina at 9.30pm UK time after they lost 3-0 to the Hockeyroos in their semi-final.

Also honoured at the ceremony was Maria Verschoor, the 19-year-old Dutch forward who has been named as the FIH talent of the year. The award recognises the most outstanding performer aged 21 or under.

At 36, Luciana Aymar becomes the oldest ever recipient of an FIH player of the year award. However, her incredible performances over the last 12 months have played a crucial role in helping Las Leonas win the Pan American continental championship and also claim top spot in the FIH World Rankings. She has been in sparkling form at the Argentina Hockey World League Final, delighting sell-out crowds with her dazzling skills, pace and visionary passing.

Widely regarded as one of the greatest players to ever pick up a stick, Aymar’s eighth FIH title sets a benchmark that may never be surpassed.

For teenager Maria Verschoor, 2013 will be a year that she will remember for the rest of her life.  The livewire forward was hugely impressive at the ERGO Hockey Junior World Cup earlier this year, being both a creator and scorer of goals as the Netherlands claimed the title in Mönchengladbach, Germany.

As well as success with the U-21s, 2013 marked the start of what promises to be a stellar career with the seniors when she made her debut against Australia in February at the tender age of 18. She is currently part of the Netherlands squad competing in the HWL event in Tucuman.

The voting for this year’s awards was made by an expert panel consisting of coaches, athletes and representatives from the media. Each panellist was allowed to nominate a maximum of five candidates for the Player of the Year and three for the Talent of the Year. The panellists were only allowed to put forward one nominee from their own team or country in each category.

Although Aymar emerged top of the pile for the senior award, many other world class players were very much in the running due to the large number of votes they each received. Germany defender Tina Bachmann, Australia captain Madonna Blyth, England striker Alex Danson, Korea forward Park Mi Hyunand New Zealand midfielder Kayla Sharland all received enough nominations to make the 10-strong shortlist, as did Aymar’s fellow Argentine international Carla Rebecchi.

Three Dutch players also featured in the top ten – Eva de Goede,Ellen Hoog and Maartje Paumen, who was crowned player of the year both in 2011 and 2012.

Maria Verschoor saw off strong challenges from some of the most exciting young players in the game, with Argentine duo Agustina Albertarrio and Florencia Habif joining England’s Lily Owsley and India’s Rani on the five player shortlist for Talent of the Year.

The FIH would like to congratulate everyone who made the shortlist, with special congratulations going to our winners.