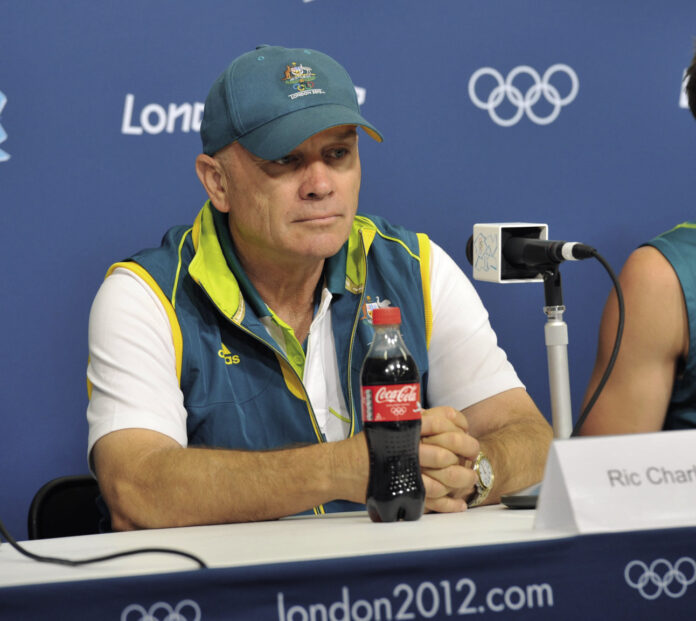 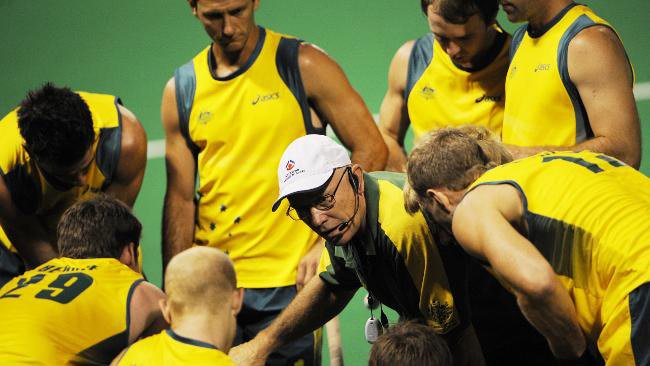 Spending a couple of hours with Ric Charlesworth in an expansive mood is a revelation. Gone is the abrupt and curt Australian coach seen in post-match interviews or scowling pitchside. In his place is a voluble, friendly man quick to produce a memorable phrase.

There is no doubt Charlesworth is a frighteningly high-achiever. He managed to combine a stellar hockey career as a player, including four Olympic Games with opening the batting in first class cricket for Western Australia, qualifying as a medical doctor and a stint as a member of parliament.

You get the impression that whatever he turned his hand to, he would have made a success of it. But initially at least, being a hockey coach was a long way off the radar when he hung up the hockey sticks after a 227-game international career.

Back then, after the 1988 Olympic Games in Seoul, a long career in politics or medicine beckoned.

“I never ever believed that I would be doing what I am doing now,” he tells a group of coaches at the MT13 Annual Conference in Beeston, Nottingham.

“I had the safest seat in Western Australia and I could still be in the federal parliament now,” he says. “But I made a lifestyle decision to get out of Canberra. And my view was that I was going to go back and practise medicine.”

All that changed in 1992 when some of the Hockeyroos who had come back from the Barcelona Olympics (where Australia finished fifth) approached him and asked why didn’t he apply to be coach of the team.

“I hadn’t ever thought about it,” Charlesworth says. “I had coached my club team and the state U21 team, but at the time I was coaching my daughter in the U15s.”

Charlesworth’s appointment was controversial as he hadn’t completed his Level Three coaching badge – a job requirement – although, of course, he soon finished that. But, with hindsight, the timing, and the choice, were both perfect.

“I went to work in a pair of shorts and a tracksuit rather than a shirt and tie,” he recollects. “And I had a group of athletes who were ambitious, skilful and hardworking and it was a terrific environment to operate in.”

Hockey received a major boost in 1993 with the awarding of the 2000 Olympic Games to Sydney. Charlesworth’s Hockeyroos then delivered four years early with gold at the 1996 Atlanta Games before doubling up with a home-Games gold four years later.

And it wasn’t just the Olympic medals – during the 1990s the Hockeyroos established a continuing pattern of success that has never been matched in women’s hockey. Australia won the 1994 (Dublin) and 1998 (Utrecht) World Cups and no other country won a Champions Trophy for the entire decade (although one of these, 1991, was before the Charlesworth era).

Olympic success for Australia in the men’s game has, however, been more elusive. Charlesworth was appointed to the Kookaburra’s programme in 2009. That side went on to win World Cup gold, in 2010, for the first time since Charlesworth himself had stood on the top of the podium in London, 1986.

But the dream of the Olympic gold was shattered at London 2012 by a 4-2 semi-final loss to Germany, although the Aussies did go on to defeat Great Britain 3-1 for bronze. And London may well be the final Olympic Games for the Western Australian who was selected for five Games himself as a player (although Australia boycotted Moscow 1980), and won silver in the first Astroturf Olympics of Montreal 1976.

“I have a contract that goes until the Commonwealth Games and I think that is probably enough for me,” says the 61-year-old. And whatever happens in next year’s World Cup and Commonwealth Games, Charlesworth can only be seen as a remarkable coach. So what is the secret of his success?

Charlesworth is wary of simple answers. “Hockey is a complex integrated team activity,” he says. And he then likes to quote HL Mencken’s axiom: “For every complex problem there is an answer that is clear, simple, and wrong.”

But within that complexity, Charlesworth clearly has a pretty good idea about what he is trying to achieve.

“Hockey has a range of skills and abilities that you need to have if you are to be successful,” he says. And developing those skills and abilities should never stop. “Most players that come into the international programme don’t know how good they can be. They don’t set themselves high enough standards.

“What you need is for your players to have reproducible skills under pressure. There is no easy way to do that – it is just lots of work and lots of diligence.”

To this end, Charlesworth has his Kookaburra charges working relentlessly on one-on-one elimination and tackling skills. Also on the continuous improvement programme are backhand hits – both upright and edge, front-stick hitting and what Charlesworth regards as the much-neglected push pass.

With all the passing skills the emphasis is on performing them under control – especially flat when needed – and when running at full pelt if required.

Tactically there is an emphasis on gaining quick, clean possession of the ball. Then moving it fast. This is the directness we now associate with all Australian hockey teams.

His tactical knowledge is vast, but the veteran admits he is less controlling than he was in his earlier days in the dugout. There is a clear emphasis on the players and with the coach’s role being to enable them to perform at their best and make their own decisions.

“You want a leaderful team. What you want is the athletes on the field making decisions for themselves. All the decisions that are made in hockey are made by players, on the field, and under pressure.”

The players are also under intense scrutiny for the coaching staff. Underpinning Charlesworth’s commitment to improvement is a relentless empiricism.

“You have to count and measure,” he says. “Otherwise you are just left with subjective impressions of the game.” And it was Hockey Australia and Charlesworth who were at the forefront in sport as technology for match analysis ramped up from the 1990s onwards.

Nowadays, with the Kookaburras for example, chances created are rated from one to five – a penalty corner is five, as a free shot from the top of the circle. A shot from a narrow angle might be one. Each of a players posessions are similarly scored.

Maybe it’s because he is back in England, but talk of numbers prompts a barrage of London 2012 statistics .

“In London we had 40 per cent more shots than any other team and allowed 40 per cent less,” Charlesworth says. “And we didn’t win a gold medal.”

He continues: “In the semi-final we had 22 shots on the German goal for three goals. They had seven shots for five goals.”

This leads him onto the subject of goalkeepers, a skillset, he says, where Australia’s development has lagged behind it’s progression in other aspects of hockey.

“We have done well in other areas, but not in that one. The most important person in the team is the goalkeeper. The Olympic final has been decided by goalkeeping more times than I can remember.”

Goalkeepers are, of course, at the blunt end of statistics – the number of times the ball ends up in the net is what decides the result at the end of the day. But it is the accumulation of error that leads to goals conceded.

“No one scores a goal against our team unless we get three or four things in a row wrong,” Charlesworth says. And that isn’t conceit, it is a recognition of how important the elimination of error is.

“You look at games and they are decided by getting small details right, or wrong. The margins in hockey are really small,” he continues.

And when it comes to attention to detail, that includes close analysis of rule changes and how they are interpreted. The Hockeyroos were, for example, at the forefront of squad hockey when unlimited substitutions were introduced in the 90s. And Charlesworth is already working through how the new above-shoulder play rule is affecting the dynamics of international hockey.

So that’s the number-crunching Charlesworth, but don’t make the mistake of thinking there is some sort of dry bean-counter at work. Charlesworth remains a true lover of the game.

He heads out to the Beeston pitch to demonstrate a couple of the Kookaburra’s warm-up drills using a school-age group attending the conference where he is the keynote speaker.

A half-pitch, multi-gate, zig-zag move is set up and Charlesworth’s emphasis is on precision in execution, decision making (where to go after you play the ball in particular) and keeping count.

He quickly focuses on cajoling the young players into trying to pass through the gates – not just near them – and sets the challenge of getting all six of the passes precisely right. “This is a precision drill,” he calls out. “I expect the Kookaburras to get this right every time.” The youngsters rise to the challenge, not least due to Charlesworth’s enthusiasm.

Similar attention to detail follows in a three-player reverse-stick pass-and-move drill and then a short-sided game.

“Who is this coach,” one of the younger players quietly asks.” And, let’s face it, I wouldn’t have been able to name any international hockey coach in my teens.

The nature of hockey means that even the coach of one of the world’s leading sides is far from widely recognised. But Charlesworth’s influence on world hockey will be seen long after his expected retirement after Glasgow 2014. The Australian re-invented women’s hockey at the end of the old century with the Hockeyroos. And many of those ideas carried through into the men’s programme.

The Kookaburras will be defending champions at the 2014 World Cup, and only a brave, or rich, man to bet against Charlesworth’s side in the Hague.