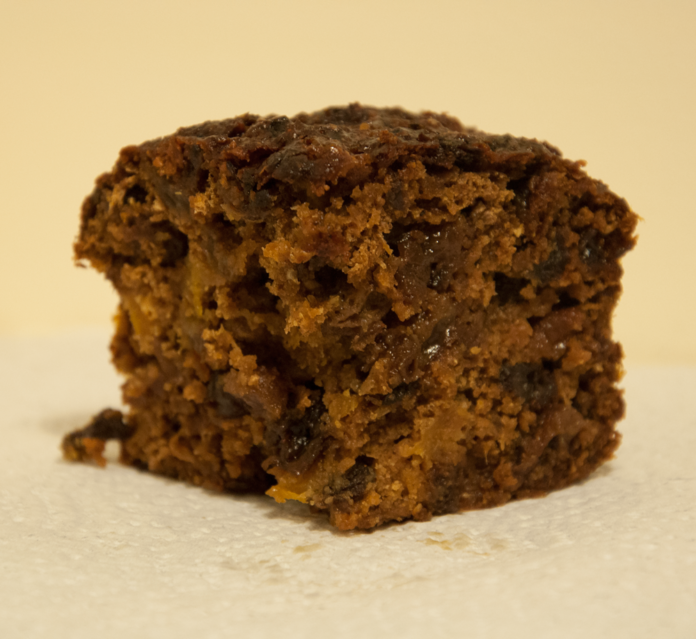 Even if you are watching your weight, you don’t have to miss out on Christmas cake. This recipe uses beaten egg whites to contribute some of the volume usually produced by creaming butter and sugar. The sweetness comes from the dried fruit.

It doesn’t keep as well as a traditional cake so make it no more than a few days before Christmas.

Crush the pineapple with a potato masher then combine with the mixed fruit, apricots and fruit juice in a pan. Slowly bring to the boil and simmer, without a lid, for three minutes. Remove the pan from the heat, cover and allow to cool. Ideally the mixture should be cold – but just make sure it is cool enough that the egg doesn’t start cooking when you add it.

When the mixture is approaching cool, pre-heat the oven to 160C (or 150, fan forced) and line a 20cm square cake tin with baking paper. Separate the eggs and whip the whites in a large bowl until they are stiff and form peaks easily.

Fold the fruit and egg-yolk mixture into the egg whites. Do this slowly adding a spoonful or so at a time using a metal tablespoon to preserve as much of the air as you can. Lastly fold in the wholemeal flour to make a firm mixture.

Spread the mixture into the lined tin and bake on a middle shelf in the oven for 1 ½ hours. To keep the cake moist, allow it to cool in the tin covered with foil.