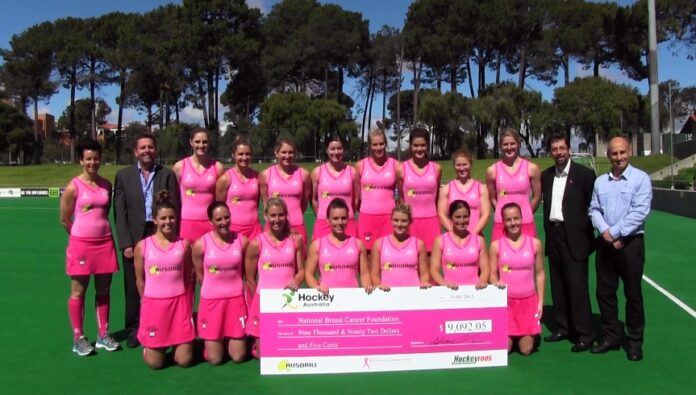 Australia’s women’s hockey team, the Hockeyroos, were joined at training today by representatives from National Breast Cancer Foundation (NBCF) and Ausdrill as the reigning Commonwealth Games gold medallists presented NBCF with a cheque for $9092.05. The money was raised by the Hockeyroos and their major sponsor Ausdrill during a community engagement trip to Kalgoorlie in May.

The presentation also marked the announcement that the Ausdrill Pink Ladies Day will return to this year’s International Super Series Hockey 9s in Perth on Saturday 19 October.

The event will see the Hockeyroos don specially made pink bodysuits for their match against world champions Argentina on the Saturday with fundraising activities hosted throughout the day. Fans attending the Hockey 9s are encouraged to get behind the cause by wearing something pink on the day.

Presenting the cheque, Hockeyroos captain Madonna Blyth said: “The Hockeyroos and National Breast Cancer Foundation have formed a strong bond over the past couple of years and it is a real honour to present NBCF with this cheque.

“I have experienced how breast cancer can impact upon families. My aunt was diagnosed with breast cancer ten years ago but, fortunately, she is one of the luckier ones; she came through it.

While one in eight Australian women will develop breast cancer in their lifetime, the more positive news is that there is a strong survival rate in this country. The fact that we can play a small part in this through raising funds for further research, screening and improved treatment is hugely important to the team.

“We thank everyone that put their hands in their pockets to donate money in Kalgoorlie, whether they made a gold coin donation, bought a raffle ticket or purchased a piece of Hockeyroos memorabilia in the auction. Thank you.

And Blyth said the Hockeyroos can’t wait to support the cause at the 2013 Ausdrill Pink Ladies Day, adding, “We’re thoroughly looking forward to supporting the National Breast Cancer Foundation this year at Ausdrill Pink Ladies Day and hope to raise even more money. I’d urge everyone who comes to the International Super Series Hockey 9s to embrace the event and wear pink.”

While five-year rates for breast cancer have increased dramatically since the Foundation’s inception, from 70 per cent of all those diagnosed in 1994 to nearly 90 per cent today, Ms Renouf says the National Breast Cancer Foundation is committed to ending deaths from breast cancer and beyond that, prevention and cure.

Ausdrill managing director Ron Sayers said: “It was an absolute pleasure for Ausdrill to be able to facilitate the Hockeyroos’ trip to Kalgoorlie and to help raise so much money for National Breast Cancer Foundation.  The partnership between Ausdrill, the Hockeyroos and NBCF is a strong one and I’m particularly pleased that, once again, Ausdrill Pink Ladies Day will be part of the International Super Series Hockey 9s as we continue to support this cause.”

A special Ausdrill Pink Ladies Day function will be hosted as part of the day, during which guests will be given the opportunity to meet members of the Hockeyroos team in the privacy of the hospitality suite, hear from invited speakers and enjoy a great day out while supporting National Breast Cancer Foundation.

Tickets for the Ausdrill Pink Ladies Day function are on sale for $99 now via www.hockey9s.hockey.org.au/tickets or by calling 03 9947 9900.

General admission tickets to the International Super Series Hockey 9s are also available via the website starting at $20 for adults.